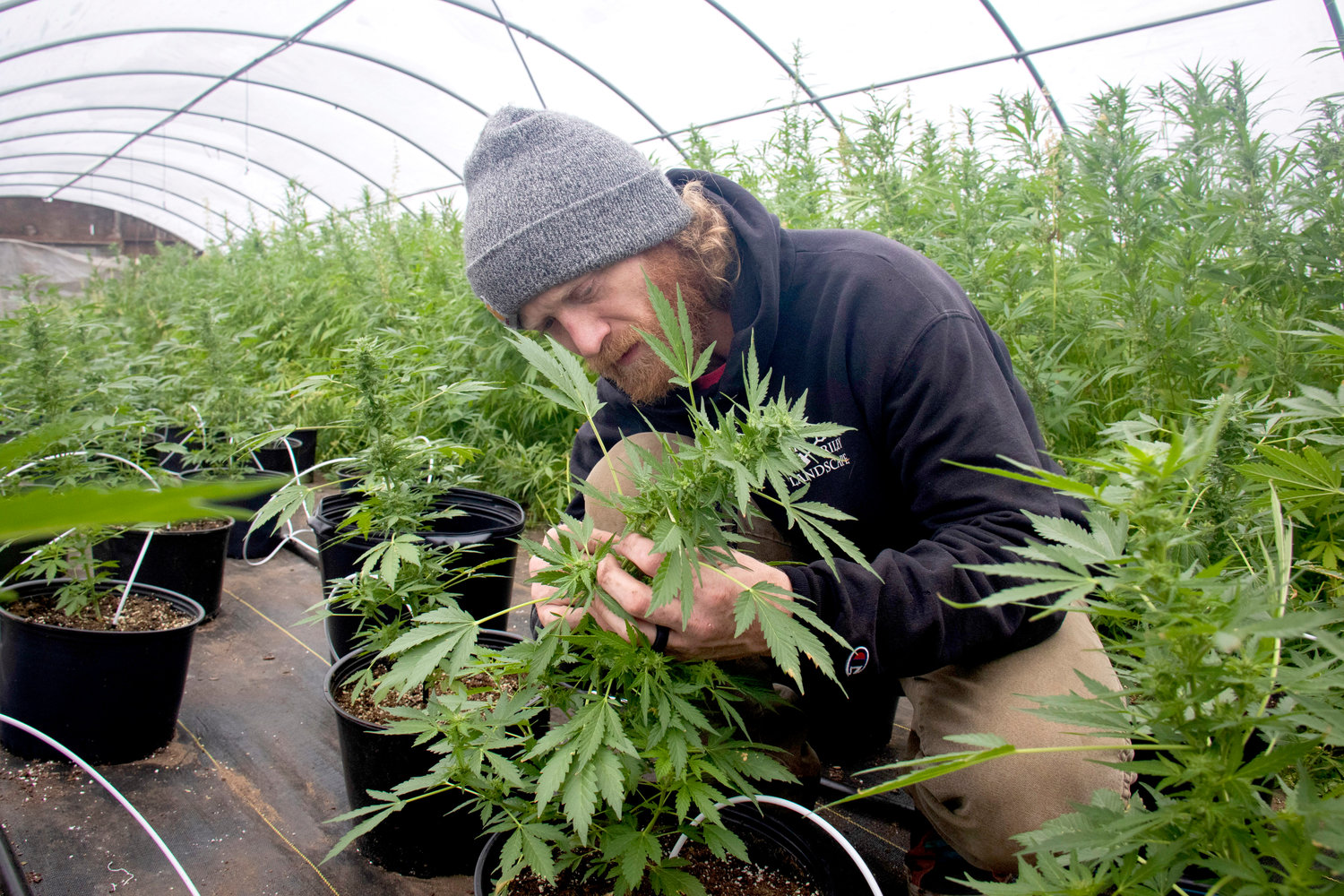 A student examines a hemp plant inside the greenhouse at Muscatine Community College during the growing season.
Contributed photo 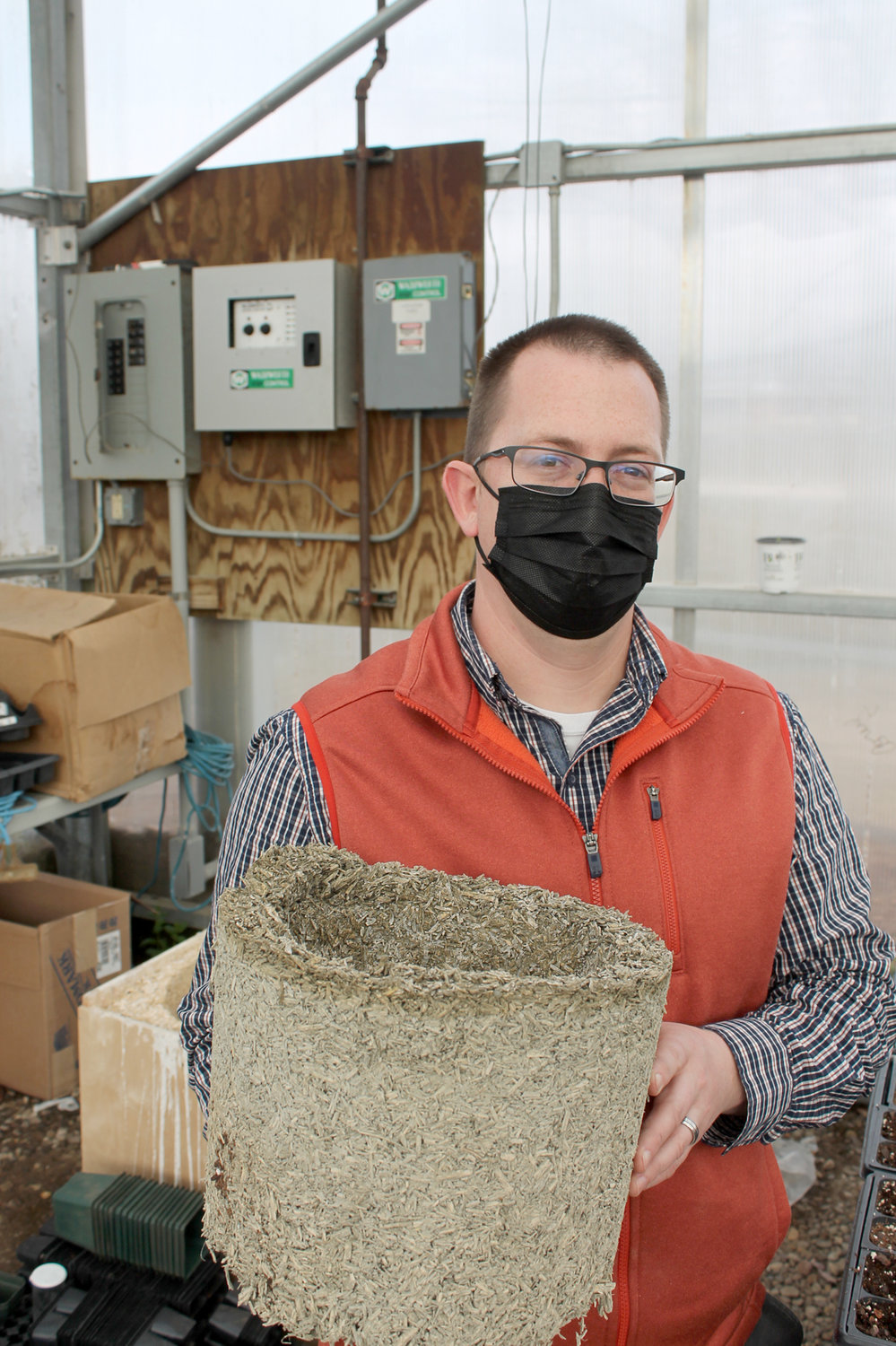 Muscatine Community College agriculture teacher Shane Mairet displays one of the products made by the first Iowa hemp class: A container each member of the class created from hemp, water and chemical lime.
Tim Evans 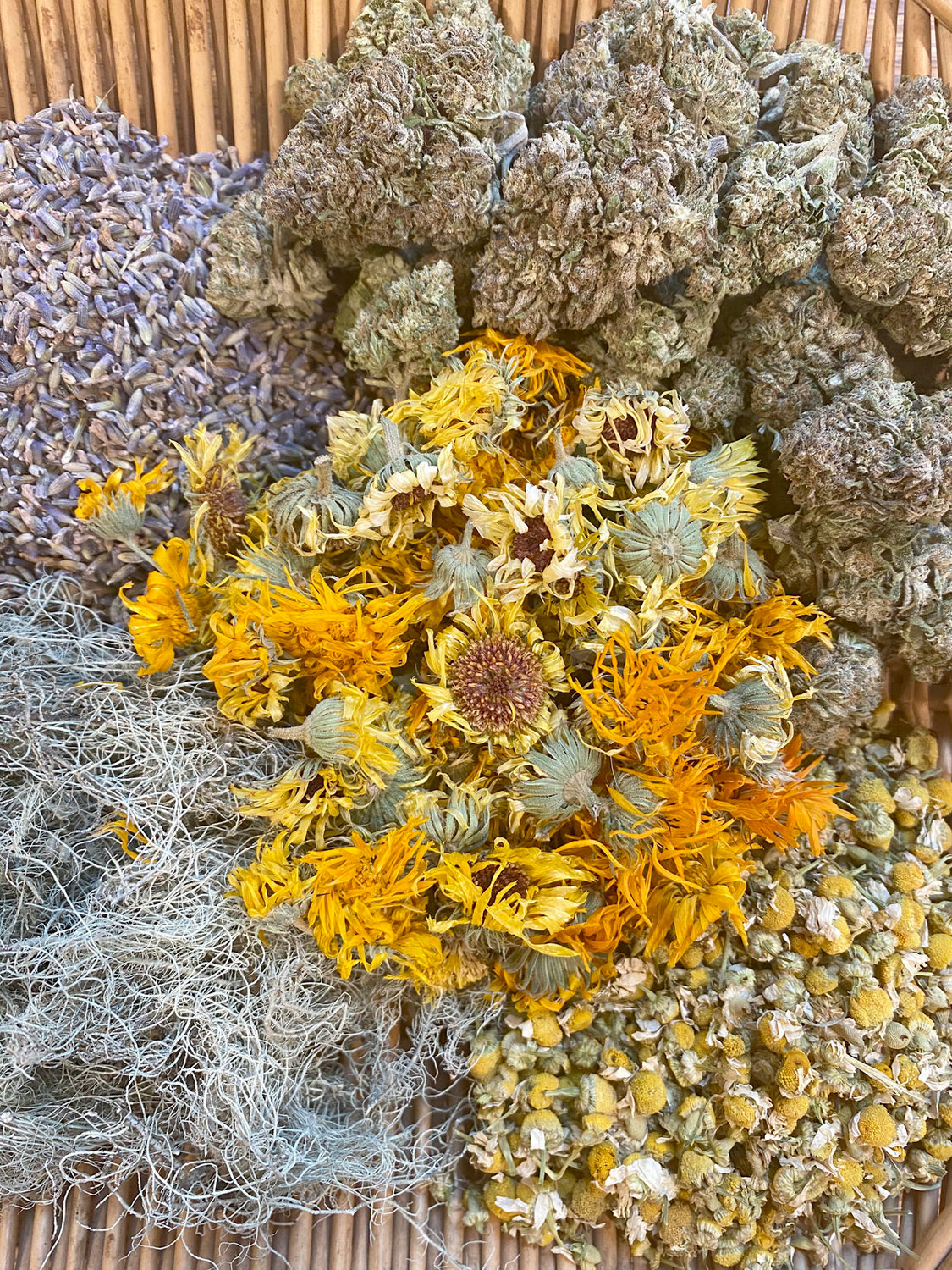 “Hemp in Iowa has endless possibilities.”

That’s what Shane Mairet, the agriculture instructor at Muscatine Community College, said about Iowa’s first and only hemp education institutional offerings after developing a program that started a year ago that may still be a step ahead of its time.

Mairet was a member of a panel of Iowa leaders who spoke on the subject of “Industrial Hemp Production: Lesson from the first year” on Wednesday, March 10, talking about the program he taught to 10 online and in-class learners in Muscatine as the first official hemp education program in the state.

The teacher describes hemp as a “versatile plant” that can be produced into just about anything from wood, insulation, clothing, cement, and even as a substitute for traditional plastics, but the 60-some farmers across the state who took out licenses to grow the plant last year had trouble finding a market, many giving their harvest away.

“It’s kind of like the chicken before the egg question,” said Mairet, noting production licensing and plants haven’t caught up to the idea of using the new material that grows quickly and plentiful.

Using the college’s agriculture greenhouse, his class grew about 3,000 square foot of the crop through the school year, eervesting it and experimenting by making products from it. He hopes to be able to grow more hemp through the warm weather season as part of the one-year course, which will begin again next fall following April registration.

The whole hemp class idea grew from a change in federal legislation that made growing hemp legal nationwide in 2018, but although states were quick to set up rules and regulations, as was the United States Department of Agriculture, to protect from “bad actors,” the biggest kink in the system seemed to be the fact there was no market for the crop that promised to be a “get-rich-quick scheme.”

“If you read online. it’s easy money, I’d suggest you look at a different website,” said Robin Pruisner, the Iowa hemp administrator for the Iowa Department of Agriculture who also participated in the online “lessons of the first year” seminar.

“It’s not like row crops,” she said of marketing options that “can be sold a lot of different ways,” including having worldwide buyers, ethanol plants, feeding livestock and more. “With hemp, we’re working on developing those markets.”

She calls it a “balancing act,” again going back to which came first – the chicken or the egg. But Pruisner says there are markets developing, including a use for hemp in pediatrics as an experimental medicine called “Charlotte’s Web,” aiding youngsters who have a history of seizures, made partially from a hemp extract.

She says even production equipment would need to catch up with the industry, noting most of the work in harvesting and preparing hemp for market is done by hand labor, encouraging growing small acreages of the crop, at least until markets develop.

State Representative Jared Klein, who represents District 78 in southeast Iowa, said there are plenty of empty former manufacturing buildings even in his own district that could be used to create hemp products from fiber, but said it will all take time.

He complimented the program that was just an idea two years ago when the community college saw a desire for education to learn about growing hemp, pointing out students who are getting involved in the program may be the entrepreneurs that help bring hemp to a profitable crop.

Mat Miller, owner of ICanna, LLC, a one-man hemp processing facility in Ames, says it’s been a “long road” and it’s taken him until March of this year before he can legally manufacture products. He says he’s working all the time at finding markets for his “safe” CBD (cannabidiol) products, from stores that sell organics to CBD outlets. It’s not his full-time occupation – noting he works about a day a week at his facility.

Pruisner was quick to point out that although a lot of stores may sell CBD oil, it’s very likely not legal, and regulations are being pushed to insure people aren’t buying “almost a snake oil,” as Mairet described it.

“Eighty percent of the products out there don’t contain what they say is in there,” said Pruisner, cautioning that, “buyers beware.”

Klein said while CBD oil may be the immediate market for hemp, the fiber portion of the plant will be the future. He said ICanna is doing a lot of things right in growing the business from scratch, making sure products are safe and regulated through the DEA (Drug Enforcement Agency) and growing into new markets.

Mairet, who has a horticulture degree from Iowa State University, couldn’t agree more about the future of fibers from hemp, noting there needs to be a cultivation of products. “We’ve run the numbers,” he said of becoming profitable in the business, although noting it’s “not a get-rich scheme.” The teacher said a farmer could gross into the six figures off a small piece of land if the markets are available.

“I truly believe that entrepreneurship will create the leaders in this business,” Mairet said. The teacher said he may have been the perfect educator to take on the course because of his background in growing produce, horticulture and landscaping, noting he knew of various irrigation methods and about fertilizers to control weeds that can grow faster than hemp, killing it quickly if it’s not controlled.

Mairet said his average student wasn’t traditional, noting there was even one retiree who took the course, pointing out those classes came “in the right position at the right time,” and he hopes to make people successful in sales and business.

“We’ve got the right students,” he said, noting he wanted students who would help grow the industry, noting a couple of his students are planning to farm crops this year, hoping to bring them back to help future students in the program he hopes to grow.

Mairet said he’s teaching agronomy and skills his students will use in the future, but says the industry has to grow, and growing it from scratch is difficult. “It’s a hard industry. How do you build an industry?” he questioned, noting although hemp’s been a crop for thousands of years, it needs to redefine itself.

“We hope this year the industry can continue to grow and expand,” the teacher said, noting he was proud to be able to offer the first one-year diploma program and can’t wait for his next round of students.

The entire group of panelists said they are open to answering questions about legislation, the state inspection process, growing the plant, creating a market for hemp and more.

Pruisner has even helped educate law enforcement about hemp, and Klein says staying ahead of the “bad actors” is a challenge, noting he’s learning there is a lot of overlap between public safety and agriculture.

“There’s an overwhelming amount of people trying to abuse the system,” he said, noting he’s been closely involved throughout the entire year on refining legislation to grow the industry for Iowa.

Mairet said hemp grows as a single stock. “Depending on how much room it’s given, it can be like corn and be a few inches wide and eight to 12 feet tall or planted with several feet between each plant and it could look like a Christmas tree and be four to eight feet tall and four to six feet wide.” He said typically CBD varieties are the wide ones, and the tall, narrow ones are fiber varieties.

Local sports
Veterans' Appreciation Night North Scott's baseball team will host its annual Veterans' Appreciation Night when Clinton comes to town for a non-conference game on Friday, July 1. All veterans will be granted free admission, and be introduced between the junior varsity and varsity games. They will also receive a free sandwich and drink from the North Scott Athletic Boosters.
It's make-or-break time for Lancers Call it the calm before the storm.
Ouch! Bulldogs put crimp in NS plans Just when things were getting interesting, along comes Bettendorf to throw a little wonk into the party.

Delmar A. Gilbert, 88, of Eldridge, died Tuesday, June 21, 2022, at the Davenport Lutheran Home. No services or visitation will be held. Chambers Funeral Home, Eldridge, is assisting …