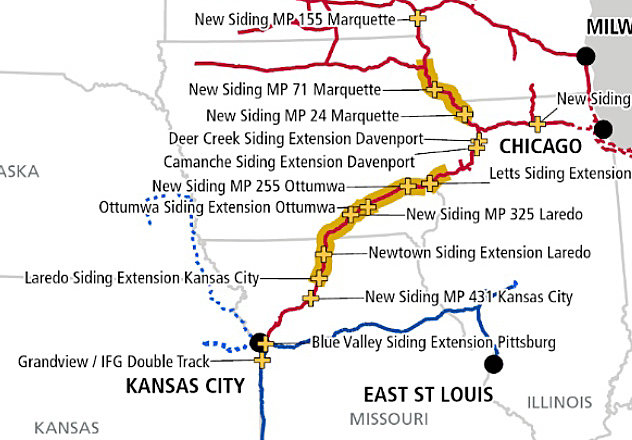 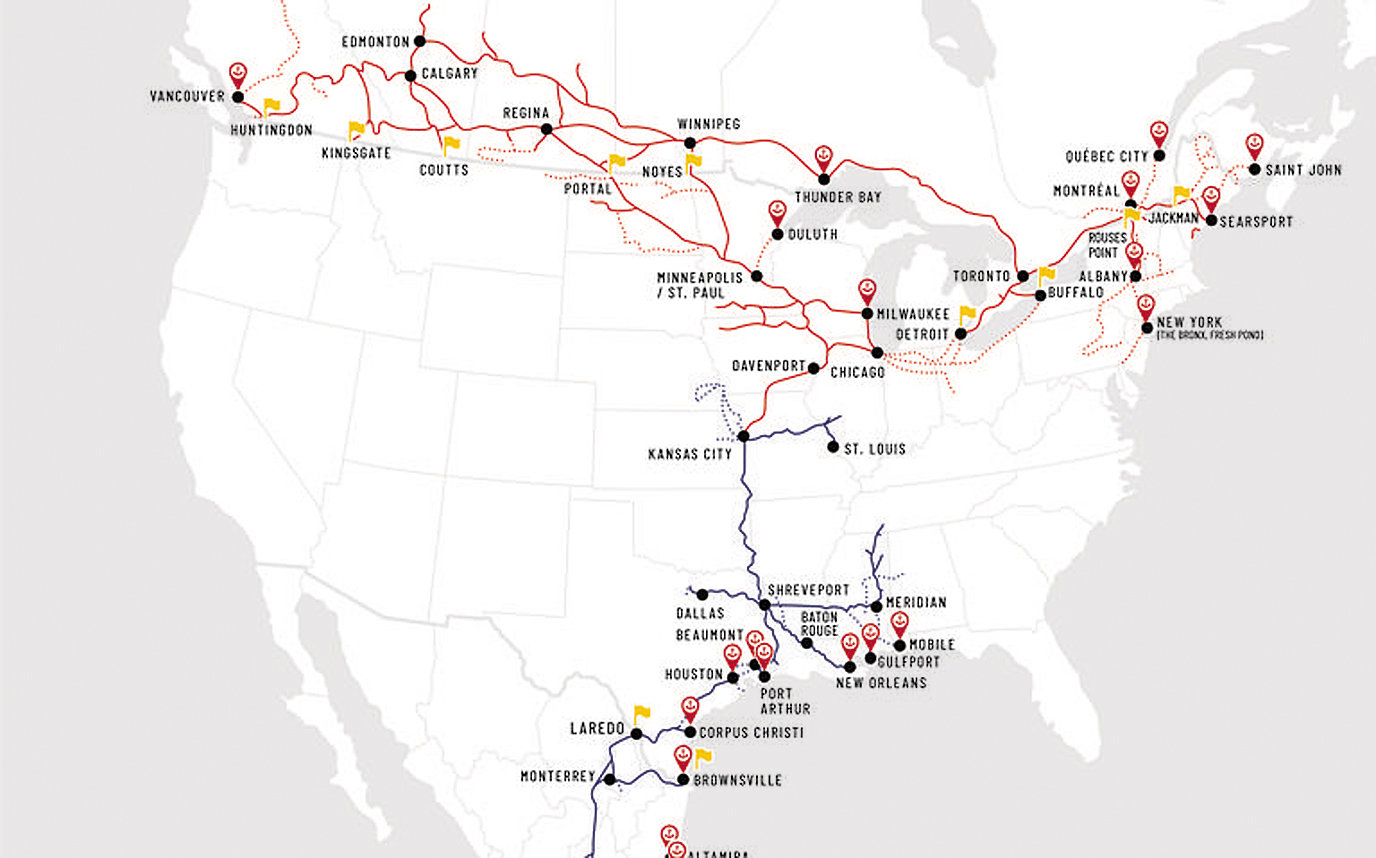 Each meeting offers opportunities for input. The Surface Transportation Board said interested residents may join all, but need to participate in only one.

The federal Surface Transportation Board begins seeking feedback this month on the CP and Kansas City Southern merger that relies on tracks through Scott County as a linchpin for grain, ethanol, corn syrup and other commodities through Kansas City to customers in the southern U.S. and Mexico.

Six online meetings, beginning Nov. 30, launch the process publicly. The forums allow the public to influence the scope of environmental impact statement. The statement will help the Surface Transportation Board make a decision by fall 2022 on the merger.

In a 4,342-page proposal, CP says the merger will triple train traffic through the county and spur shipping, grain elevator and side rail construction.

(Link to Federal Surface Transportation Board website on the meger.)

The company says Davenport sub from Sabula to Davenport’s Nahant Marsh yard will see volume rise from 7.1 trains per day to 21.6.

The CP’s Davenport North stretch from Nahant east to the Government Bridge rail crossing would increase from 6.8 to 17.5 trains per day.

The CP report shows no impact on the Eldridge spur. The company reports no train traffic now and none expected with the merger.

CP calculates the merger will add $716 million in new revenue each year, and reduce costs by another $173 million per year. The company on Oct. 1 reported a record $1.94 billion in third-quarter earnings, and is on track to surpass last year’s $5.7 billion in annual revenue.

CP anticipates the merger will add more than 1,000 jobs across the nation.

“We learned about it a couple weeks ago and made sure our member governments along the CP were aware. We are still trying to find out whatever we can. We are concerned about the increased traffic and the lack of access over the tracks, especially from an emergency services perspective,” Bi-state director Denise Bulat told The NSP.

Princeton mayor Kevin Kernan says he plans to participate in the online forums, but has no expectation the railroad will listen.

He said CP has been a poor neighbor for years in Princeton, ignoring requests for train whistle quiet periods, stonewalling on fixing track erosion, and removing two road crossings with little notice.

“They lie to us all the time,” Kernan told The NSP. Last summer, the railroad removed crossings that accessed two Princeton businesses.

“It was a big deal to us. We tried to stop it. I finally got ahold of someone in Canada, and they promised me they’d put one crossing back in. They flat-out lied. They said they would do it, then they came in and took the rest of the driveway out. They had no intention of following through.”

“It’s hard enough to get across tracks now. With that kind of increase, it will cause a safety concern for us,” the chief said.

Princeton resident Keith Youngers counted 12 trains Monday. The former mayor and council member has a home and business within 20 yards of the track. He’s noted increasing rail traffic over the past couple of years and said the merger impact will change his town forever. He’s learned to tune out the roar of the trains. But he can’t ignore the vibrations.

“We’re on limestone, and we can feel it shake every time,” he said.

Iowa Rail Transportation Bureau director Amanda Martin said the state has no role in this merger.

“We’re kind of just in the early stages. This doesn’t happen a lot. We don’t have a set protocol of how we handle these types of things. It’s more information gathering right now. I know CP is working with locals. They’ve been making their rounds in different communities,” Martin told The NSP.

CP proposes adding or extending side passing rails, including Camanche, Clinton and Davenport.

“To support increased rail traffic on the combined network, the applicants propose to add new passing sidings or extend existing passing sidings at 24 locations within the rail right-of-way as part of the proposed acquisition,” according to the merger proposal.

The railroad released a redacted public version of the merger proposal filed Oct. 29 with the federal Surface Transportation Board.

The proposal includes endorsements from across the nation, including the Muscatine Chamber of Commerce, and the Davenport Industrial Railroad that operates the shortline through Eldridge to Davenport’s Eastern Iowa Industrial Center.

“DIR supports swift approval of the CP-KCS combination because of the significant benefits the combination would bring, including expanded markets and port options, improved service options, and invigorated transportation competition. A combined CP-KCS would increase operating efficiencies for our customers and provide new marketing opportunities to the Eastern Iowa Industrial Center, which our rail line serves,” DIR owner Steve Berish wrote.

Among the other endorsements is David Rangel, CEO of Water Train U.S. The Marion, Ill. firm proposes Wisconsin-to-Mexico tank trains full of water over the merged line through Scott County.

It’s an example of the business boon CP promises if the merger is approved.

“Increasing the destinations available for grain shipped from the Upper Midwest will also encourage additional investment by CPKC and our customers to expand and improve origin grain elevator infrastructure,” the firm wrote.

The merged rail’s “improved access to a more diverse range of grain destinations will generate incentives for us and our customers to invest in additional … elevators on CP’s lines in Iowa. Following our announcement of the CP/KCS Transaction in March, CP heard from many grain shippers expressing interest in making these sorts of investments.”

CP expects that work to commence within the first year of the merger.

“With the CP/KCS combination enabling us to reach markets beyond Kansas City, CP sees tremendous potential for traffic growth, and we expect our new-found interest and the concrete transportation options we will provide would support investments in new elevators tapping grain grown in this part of Iowa. Based on our own assessment and feedback from grain customers, CP anticipates that new investments in grain-loading capacity on CP’s lines in the United States could begin as soon as the first year following control approval, taking advantage of the improved market access we will offer…”

New markets for ethanol and aluminum

“CP originates 1.3 billion gallons of ethanol on our network annually and delivers it to consumer markets across the United States and Canada. The CP/KCS transaction will expand the reach of these ethanol facilities, connecting them more efficiently with high consumption destinations in the Gulf and Mexico.

CP says the merger would be a boon to aluminum and steel makers.

“The story is much the same for Canadian aluminum producers, like Alcoa, shipping to auto producers in Mexico. Similarly, finished steel producers in Iowa and Quebec will be more efficiently connected to destinations in Texas, Oklahoma and Mississippi, where finished steel is needed for infrastructure projects,” CP executives wrote in the merger proposal.

CP said the merger would expand opportunities for corn syrup makers, that now include ADM, which ships from Clinton.

“This traffic primarily consists of corn syrup and dried distillers grains from corn-rich production areas in Illinois and Iowa accessible to CP that move to Mexico and to a lesser extent to the Gulf region, where they are used for food production (for corn syrup) and animal feed (for DDGs). Two lanes that are illustrative of this opportunity are movements of corn syrup from Rock Island, Ill., into Mexico,” according to the CP document.

The document redacts the names of short line railroads that would lose corn syrup shipments after the merger. “We would expect that a CP/KCS single-line route offering would attract some of this traffic.”

“Our operating team laboured in challenging conditions and for long hours to keep CP’s routes in operation for customers. They replaced a major rail bridge in record time, lifted and tamped track that was already under water and poured rock to protect the right-of-way from rushing water … Our resiliency is a testament to the strength of our CP family of railroaders and commitment to service.”