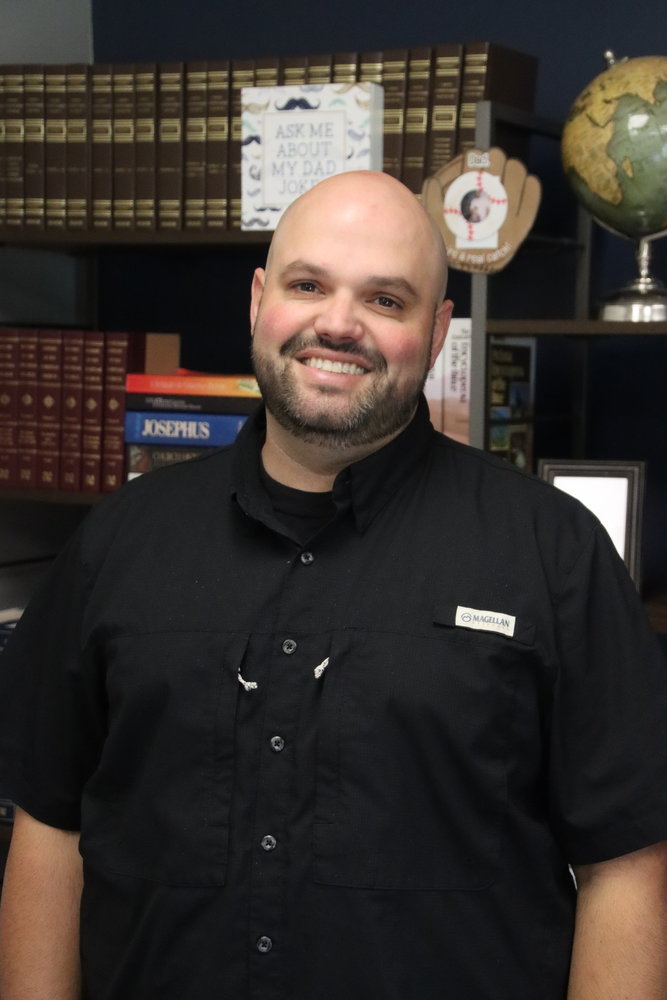 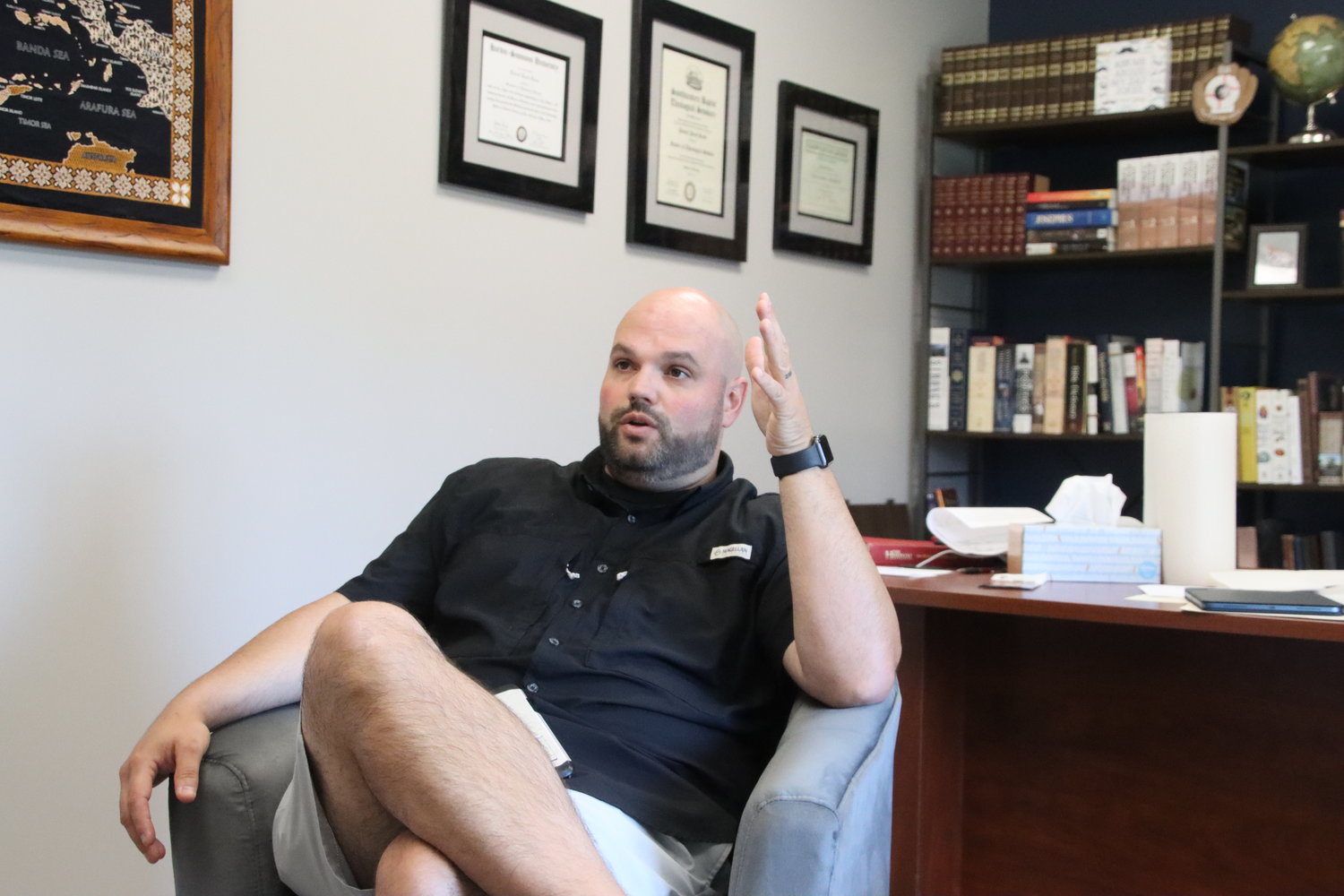 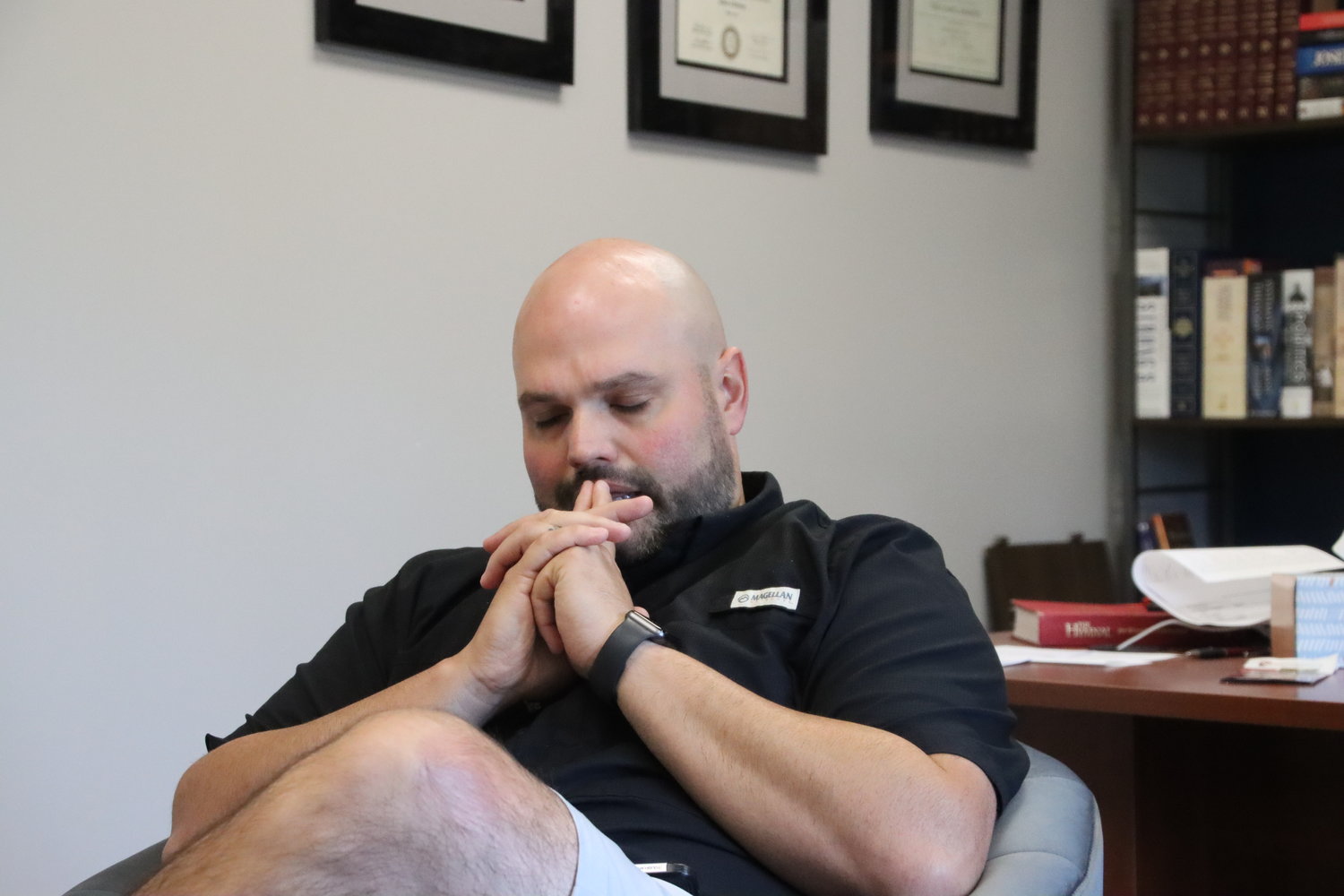 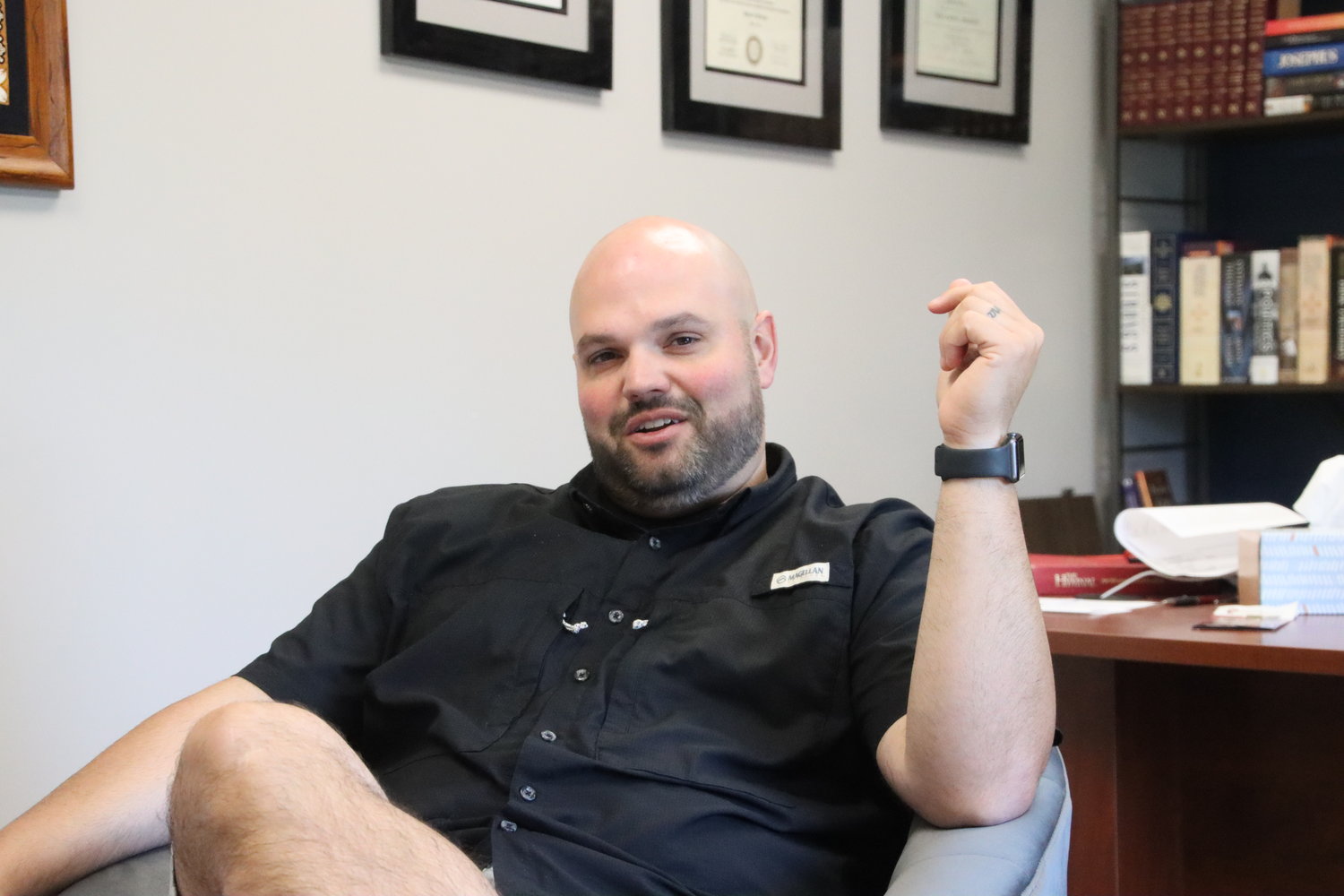 It was a typical January, with snow on the ground and single-digit temperatures. For Texas native Pastor Daniel Reese, it was his first introduction to a brutal Iowa winter, yet he knew it was time for he and his family to move north.

Reese and his wife, Sena, came to town to meet with a small group of church leaders at Cornerstone Baptist Church, in just one of the steps that would lead him to succeed the church’s longtime leader, Pastor Scott Pearson.

Now, nine months later, and after four months in the pulpit, Reese and Cornerstone appear to be a match made in heaven.

“When we first came in January, we wanted to experience an Iowa winter,” said Reese. “Down from where we’re from, winter lasts about two weeks, and it doesn’t get bitterly cold.

“It was pretty cold when we got here, but we survived. It was the people that warmed our hearts. The people are what make a church, and there are just fantastic people here, and that was evident from the first time I met them. That’s what drew me here.”

That opinion hasn’t changed since he stepped into his new position as the church’s lead pastor in mid-May.

“Since I’ve been here, there is a lot more than meets the eye,” said Reese. “The church has a great reputation in town, and I love the fact that twice a year we do ServeFest, where we go out and serve the community. That’s big for me.

“The church has a great staff, and everybody gets along. It’s just a great culture to do ministry, and we love the North Scott community.”

From Texas to Iowa

Reese grew up in Texas and graduated from Hardin-Simmons University in Abilene with a degree in Bible. He later received his Master of Theology degree from Southwestern Baptist Theological Seminary in Forth Worth.

“I originally went to school for computer science, or potentially law,” said Reese. “I just wanted to make a lot of money, because I thought that’s what you’re supposed to do.”

That mindset changed during his freshman year in college when he got the call from the Lord, and within a week changed his major.

“I was sitting in a pretty scenic area on campus,” said Reese, “and all of a sudden I just knew that God had called me to the ministry. It was just one of those things. I heard Him speak as well as you’re hearing me now.”

Reese immediately went and called his pastor, and remembers feeling both excited and scared. He started attending Bible classes, and admits that he was starting from square one.

“Even though I grew up in church, I didn’t know the Bible in depth, by any means,” he said. “I joke about the fact that I thought in the Gospels, Jesus was born in Matthew and he died in John.

“As stupid as that is, growing up in church, I didn’t know that he was born in all of them and died in all of them. That’s the level I was at. Over the next four years, I just absorbed anything I could get my hands on.”

After eventually graduating from the seminary, he served as a youth and children’s pastor in El Paso, but realized that his true calling was to plant churches. He and his wife, Sena, helped plant a church in Ohio in the early years of their marriage, and after starting a family they decided to move back to Texas, where they did Apartment Ministry in Round Rock.

The Reeses later moved to Lamesa, where he was called to serve a small church that had all but decided to close its doors in 2012.

Ironically, that church was also called Cornerstone, and as the church grew, so did Reeses' love for God and ministry.

After 10 years in Lamesa the Reeses were ready for a change. They loved the church, but felt the town was in a downward spiral, and they didn’t foresee a lot of chances for potential growth.

“We didn’t see an opportunity for our kids to thrive,” he said. “It just wasn’t a place where we wanted to raise them. In the summer of 2021, we started looking for an opportunity to serve different churches, and we really didn’t care where it was.”

It was then that Reese came across the listing for an opening at Cornerstone in Eldridge, where the longtime lead pastor, Scott Pearson, had announced his impending retirement.

Reese turned in his application to the search firm that Cornerstone had hired, but then got word that the application window had already expired. He was disappointed, because what he had learned about the Eldridge church had really impressed him.

Reese continued to interview at other churches, and then in November he was contacted by the search firm and told Cornerstone’s search was active again. They wondered if he’d still be interested in applying.

He did, and that initiated a whirlwind three months that would eventually plot a northerly course for his family.

Within a week or two of resending his application, Reese had an initial Zoom interview with church leaders, and then another one right after Christmas. He made his first visit in January.

“We came in under the cover of night,” said Reese. “They didn’t want people to know I was here, and during that visit we only met a handful of people.”

One of those individuals was Pearson, and that meeting was instrumental when it came time to eventually making a decision on whether or not to make the move.

“Honestly, following Pastor Scott was a pretty big red flag for me,” said Reese. “Ordinarily, you just don’t follow somebody, not only who’s been here a long time, but who is also planning to stay in the community, and plans on staying in the church. You don’t want to be in that situation.

“That was a concern of mine when we found out he was staying at the church, but the gentleman leading the search said, ‘I would never recommend a pastor to come into this situation, ever, it’s not a good sign. But with this pastor, it will work.’

“I said, ‘OK’ and I agreed to continue in the process, but said I’d have to meet Pastor Scott and talk to him.”

The leader of the search was right. Reese and Pearson was seemingly a perfect fit.

“After speaking with Pastor Scott and his wife (Beth), we just knew it was right,” said Reese. “He’s one of the most humble people I’ve ever met. He’s not opposed to change, and not once have I ever felt like he was looking over my shoulder. I hope I haven’t offended him. I look at him more as a mentor instead of a predecessor.

“After talking with Pastor Scott, my wife and I were sitting in service here, and we both just looked at each other. We both knew we would want to be here. We had a few more meetings that day, and went to the DeWitt campus as well. On the way back we just knew that we’d like to continue forward in the process.”

After that January trip, where Reese and his wife experienced the brutal Iowa winter, they brought their entire family back in February, where they were able to meet church members for the first time. Shortly thereafter, the congregation voted to offer him the position.

A passion for preaching God’s word

Reese, Sena and their children, Addalie, 13; Asher, 11; River, 9; and Ryker, 6, moved to Iowa in mid-May, and ever since he’s immersed himself into the Cornerstone family.

“My passion would be teaching and preaching God’s word,” he said. “I enjoy studying, and of all the things I do, that’s what I take most seriously. I treat God’s word with respect, and I want it to be applicable to everybody who walks in.

“I want people to understand it. I want to teach it in such a way that it’s appealing to all ages, and I take that seriously. That’s priority No. 1, and every decision I make will be based on what does the Bible say. I will always choose what the Bible says over what tradition says.”

“I don’t want people to see me as a guy on a stage,” he said. “I want them to see me as a friend, a confidante, and a guy that’s on the same journey as them.

“I don’t ever want to appear holier than though, because I’m not. I’m just as messed up as anybody that walks in that church. God has just gifted me with different gifts than somebody else. I don’t boast in that. I just know what God has called me to do, so I try and take that seriously.”

Reese and his family couldn’t be happier.

“The first four months have been fantastic,” he said. “We’re adjusting to Iowa as a family and learning the culture. We ask a lot of questions, and I feel like I’ve found my groove.

“Pastor Scott has been phenomenal during the transition. We’ve built a great relationship, and worked really, really well together, and that’s made it really easy. There are great people here. Now, my goal is to outlast Pastor Scott. I’m a competitive guy. If he served 28 years, I can serve 28 and a half.

“We are loving the Eldridge area,” he continued. “I told somebody the first week I was here, that I’m in a better mood driving to work, and that the part of Texas we’re from has so much drought, and just deadness. He pointed out that here, we’re surrounded by life, not death, and he was exactly right.”