Iowa opens all counties to UTVs 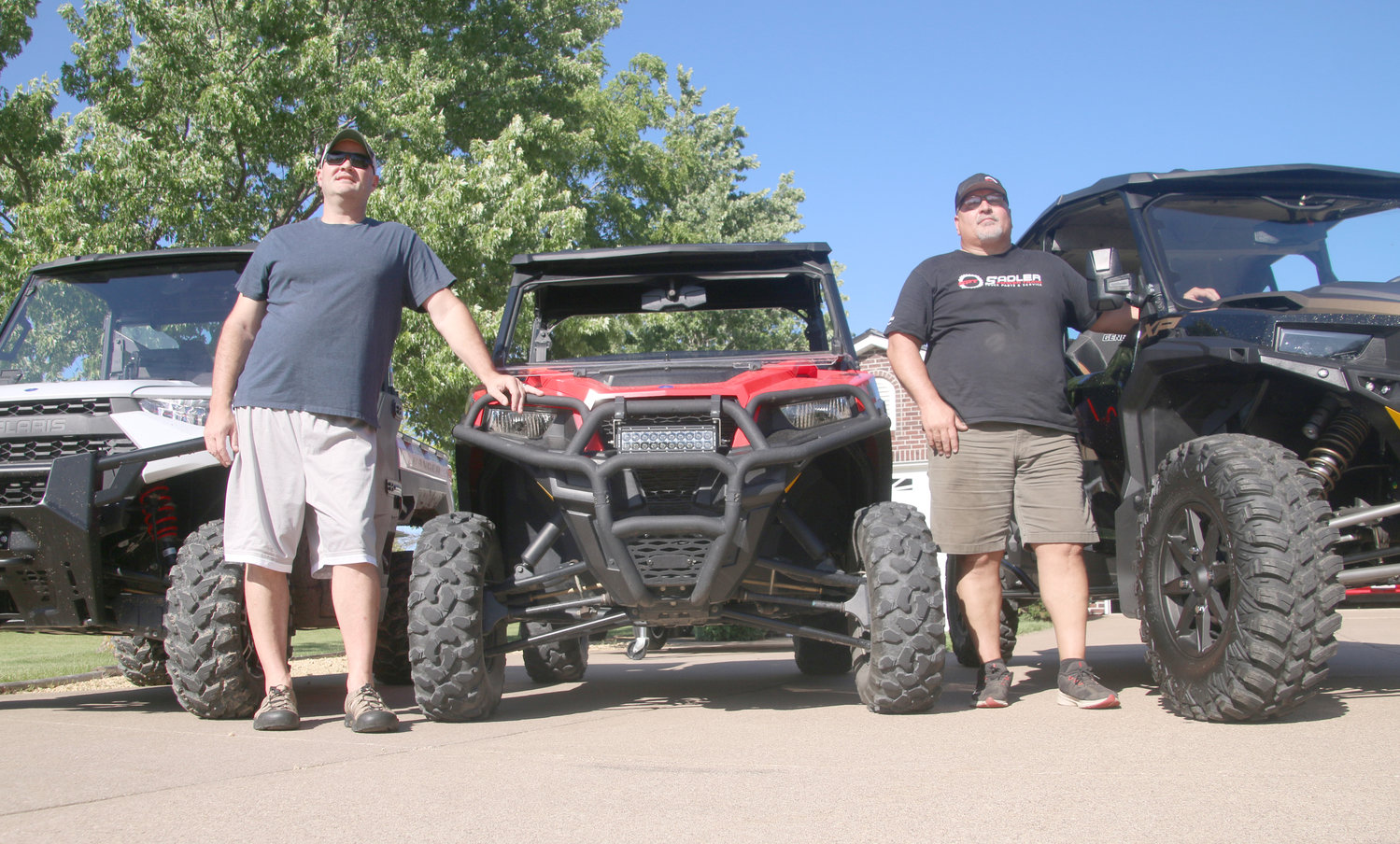 Jason Feller and Marty Scheckel of Long Grove no longer have to trailer their ATVs to reach gravel roads just a block from their homes.
Mark Ridolfi
Posted Tuesday, June 21, 2022 10:22 am
Mark Ridolfi, NSP Assistant Editor

Count on Marty Scheckel to be among the thousands of Iowans taking their UTVs to county roads July 1.

That’s when state law overrides regulations of the utility-terrain vehicles that varied from county to county.

Many, like Muscatine and Cedar, have allowed them on gravel roads with a few exceptions. Others, like Scott, have not.

Come July 1, any four-wheel UTV can go on a gravel country road, and the paved roads needed to get there.

The new law allows Scheckel and his neighbor, Jason Feller, to begin rides from their Long Grove homes, just blocks from a gravel road, instead of trailering them to private land, or often, to Wisconsin.

Both hope the new law will draw UTVers to Iowa, and encourage development of more off-road trail systems.

And they hope UTVers respect county roads, refrain from gravel-spraying “donuts,” and avoid the concerns that made the legislation a tough sell in the Iowa general assembly’s final days.

“We’ve done too much for too long to let a couple of bad apples ruin it,” Scheckel said.

Democratic and Republican legislators worked together on a bill signed by Gov. Kim Reynolds June 14 that also ends municipal registration fees and regulations, like those in Long Grove and Princeton.

Lawmakers from both parties got earfuls from constituents, including Scheckel. He pounded legislators with emails and calls, and cheered from his Florida hotel room as he live-streamed the May 24 Iowa house and senate votes.

In the Iowa House, 56 Republicans and nine Democrats supported the bill.

“It was the second-to-last bill to pass this session, but we were able to get across the finish line with some bipartisan support.”

He credited Democrat Reps. Christina Bohannan, and Mary Mascher, of Iowa City, for their help. Mascher is not seeking reelection. Bohannan is the Democrats’ candidate for Iowa’s 1st congressional district.

“It reflects a lot of compromise. It really was a collaborative process with the ATV rider groups,  and members of the Democrat and Republican caucuses,” Bohannan said.

“We talked to a number of counties that have some of these rules, and those who did not. Some counties allowed 16-year-olds to drive them. So we increased the age, an important safety consideration, I think,” she said.

The new state law allows only licensed drivers, and limits the top speed on public roads to 35 mph.

“It was a patchwork of 99 counties, all with different rules. Groups that like to go on day trips were weaving in and out of legal and illegal. It wasn’t a good situation,” Kaufmann said.

“The compromise position is on primary roads, two-lane highways, and non-interstate primary highways. A county can still restrict you from using it for joy riding. But no county can restrict you from using it to get to a gravel road,” Kaufmann said. “If you have to go on F70 to get from one gravel road to another, you’re perfectly legal,” he said. That paved road runs east and west through the middle of Muscatine County, accessing many gravel roads.

UTVs are not permitted on four-lane roads, or city streets.

“Cities are still permitted to make their own ordinances. But you won’t see them going to NorthPark Mall,” he said.

“If I had my say, they would have been able to use them all,” Kaufmann said.

“Our board was one of the first to allow ATVs on all our roads. So I’m seeing no impact.”

He reports no excessive wear and tear on Cedar County gravel roads specifically attributable to ATVs.

“We still have folks go out in their four wheels doing donuts on fresh gravel. Some of them can’t stay away from it,” he said. “We’ve had some illegal usage on county roads. We also had some fatalities before. The common denominator? Alcohol, young, horseplay.

“When they passed the ordinance, we did not see an increase in road issues,” Fangmann said.

““It has been my experience that there are a lot of complaints from homeowners in rural areas and rural housing additions about dirt bikes and three- and four-wheel ATVs that have a seat that you straddle. The main concerns are noise, reckless driving, and damage to roads and yards.

“Side-by-side ATVs and golf carts seem to bring in fewer complaints. With the new law, I would expect an adjustment period for citizens to realize that they are now legal. I also expect some accidents,” Lane said.

He urged drivers to be cautious.

“At this time, there is no plan to increase enforcement by the sheriff’s office or to treat violations by these riders any different than any other traffic violation. But I think that it is important that the public is aware that they will suddenly be out there on the roads,” he said.

Scott County engineer Angela Kersten isn’t sure what to expect.

“We don’t have any experience with this. I don’t know what impact this legislation will have in Scott County. I have been contacted by a half dozen or more county residents over the past few years that were interested in being able to operate their UTV or ATV on county roads. So I do think there will be UTVs and ATVs traveling on our roads when the law goes into effect,” she said.

Scheckel was among those who pestered Kersten. In emails, calls and appearances before his board of supervisors, UTVers asked the Scott County Board this year and last to open some of the gravel roads.

“We wanted them to designate areas outside of the interstates,” Scheckel said. “We didn’t want access to any roads inside I-280 or I-80.

Supervisors didn’t act in 2021. This year, board chairman Ken Beck told Scheckel he was waiting on the state legislation.

Dealers say the vehicles already are popular with customers.

“There has been an intense grassroots effort to get this passed. Hundreds of users across the state,” he said. Those riders will become Iowa marketers,” he said.

“I think you’ll see a jump in usage, as long as ATV groups are responsible, which they always have been, in my mind.”

Scheckel and Feller feel the same way. Both have trailered UTVs for annual vacations. Feller took his to Moab, Utah, for desert excursions, and southwest Colorado for mountain trips.

“I think you’ll see a difference. More of us staying here to ride. More people coming to check out our area. I’ll be riding more,” Feller said.

“An all-terrain vehicle operated on a highway shall be  equipped with the parts, lamps, and other equipment in proper condition and adjustment as required under this chapter for motor vehicles.

The Iowa DNR charges $17.75 for in-state and out-of-state ATV registration. The new law directs those fees to development of non-profit trail parks.

“All-terrain vehicle recreational riding areas established, maintained, or operated by the use of such grants shall not be operated for profit.

“At least 50 percent of the special fund shall be available for political subdivisions or incorporated private organizations or both.”

“A registered all-terrain vehicle … may be operated on an undivided two-lane primary highway that is not part of the interstate road system over the most direct and accessible route between any of the following locations:

An all-terrain vehicle park or trail.

A secondary road on which such vehicles are authorized to operate.

A city street on which such vehicles are authorized to operate.

Restrictions to gravel road use

“A county may prohibit the operation of all-terrain vehicles…

For no more than seven consecutive days and no more than 30 days in a calendar year when the prohibited days are established by ordinance.”

“The county board of supervisors shall evaluate the traffic conditions on all county highways such secondary roads under its jurisdiction and designate roadways on which all-terrain vehicles… may be operated for the specified period without unduly interfering with or constituting an undue hazard to conventional motor vehicle traffic.

“The board may authorize all-terrain vehicles … to stop at service stations or convenience stores along a designated roadway.”

Early deadline for next week's NSP