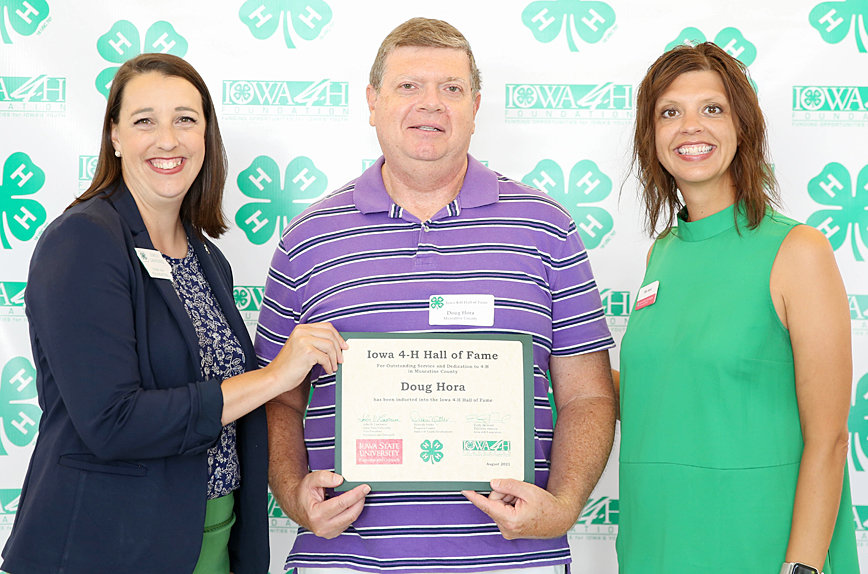 Doug Hora (pictured below, middle) was inducted into the Iowa 4-H Hall of Fame on Sunday, Aug. 22 at the Iowa State Fair. Muscatine County Extension and Outreach nominated Hora based on his service and dedication to the 4-H program.

Doug started his first official connection with Muscatine County 4-H in 1971, when he became a member of the Wilton Hustlers 4-H Club. In 1998, he volunteered to be a leader for that very same club because his children were carrying on the 4-H tradition.

On his volunteer application, when asked why he was interested in a 4-H volunteer position, he stated he “would like to help guide youth in exploring all the different opportunities 4-H has to offer.” And he has done just that, not only as a long-time club leader, but as a founding member of the Muscatine County 4-H Endowment committee.

The Muscatine County 4-H Endowment was established in 2013. Since that time, Doug has been a proud supporter of Muscatine County 4-H members and volunteers by conducting fundraising, organizing a fun run, assisting with a silent auction each year, as well as holding many leadership positions within the committee. His efforts have created a channel for youth to experience new opportunities, gain life-long skills, and explore places beyond the county line.

Doug recently stepped down from his position on the Muscatine County 4-H Endowment after eight years of service.

Leading by example, Doug has inspired youth, and adults alike, to be stronger individuals and leaders in their communities. Everyone who has had the pleasure of working with him has been moved by his quiet, humble desire to make the world a better place. Muscatine County 4-H is so grateful for his dedication to this organization and the impact he has made on the lives of its members, volunteers, and staff.

'Frozen Jr.' : Love and acceptance on stage at NS